This post is for other women. This post is meant to speak to the woman on the other side of this screen. Men can sympathize with all the words that I am about to type, but they will never understand what life is like when you're a woman. And they'll never understand the power that women have over other women. And how often women abuse this power.

As most of you already know, my mom was my driving force as a kid to be an individual. She even said she wanted to be the crazy witchy lady on the block. She never seemed to care about what other people thought about her. I don't know where she got her confidence and self-love from but I'm very happy she passed it onto me. My mom was never the type to make fun of other women (or people in general) when we were out and about. She would often tell me that I shouldn't judge others by what I see in their outward appearance. She would also remind me that I wouldn't want to be judged by my outward appearance all the time. Sometimes you go outside in a fantastic outfit with perfect hair... And sometimes you wear your Uggs, slightly see-thru yoga pants, and you forget what a hair brush is. We're not all perfect.

As a woman, ask yourself how often a day you look at other women and think something like the following:

If you respond by saying that you've never, once in your life, thought these things when looking at another woman, you are a liar. I have been working very hard to try and not think these things and, for the most part, it has worked. I still have bad days where I will look at a woman and think something like what's written above and I immediately chide myself. Looking deeper, I know that the times I think these things is when I'm having a bad self confidence day. It's taken me a lot of time and work to become comfortable in my own skin (and I'm not fully there yet). When I think these things, I just feel worse about myself. Not only do I feel fat today, but I'm going to try and make fun of another woman for what she's eating/wearing? Not cool. It's cliche to say, "They only say those things because they're jealous" but the older I've gotten, the more I realize that cliches are cliches for a reason... Because they're true. The women whom I know to consistently (and vocally) express the things above are the same women who don't truly love themselves. You can't force someone to love themselves. Self-love really, truly, comes from within. The first step is to just recognize that you need to work on yourself and go from there. Because if you don't work on yourself, you can't help make this world a better place.

More importantly... How many times have you said this aloud? With Twitter, Facebook, Instagram, Snapchat, and all the many other forms of social media, we've seen the bashing of women rise to insane measures. You can't go to the gym without the possibility of someone taking a photo of you, just to make fun of you. You can't purchase something without women around you (or on the internet) forcing their opinions on you. Why do we do this to ourselves? We're 1,000 times more destructive to ourselves then any man can possibly be... Because we know how to hit another woman where it counts.

This brings me to an even bigger issue at hand: How we react to how women in the spotlight dress. Sure, the media is largely to blame. They provide the click-bait and the disgusting articles. They're the ones who criticize and seek these things out. The media does this because they know that's how they get views. An article that's entitled "Amal Clooney speaks to the U.N." wouldn't get Times Magazine as many clicks as "Amal Clooney shows off baby bump" (to read more about how royally Times Magazine fucked that one up, click here). As if the most important thing that Amal did that day was dress to the nines while pregnant.

Let me give you some examples: 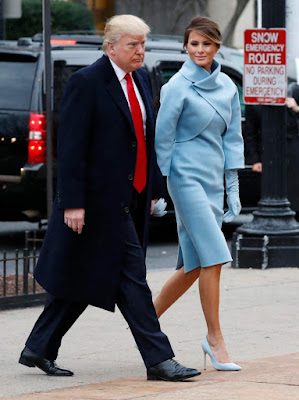 If you're an American (and even if you're not), you probably remember the day pictured above. That was the day the President Trump was sworn in. I don't want to get political or speak about my views of Trump. What I want to talk about is how many people bashed the hell out of Melania Trump for what she wore. I am still unsure why; I think she looks fantastic. Twitter was awash with people who claimed to be "open-minded" and "accepting" stating that Melania looked stupid. The constant comparisons to Michelle Obama (which, in itself is a huge issue - let's stop comparing one woman to another) and how Michelle looked better when President Obama was sworn in. I saw memes, reaction gifs, and pretty awful words written about her outfit choices. And, Melania, this is just the beginning. Welcome to the next 4 years of your life. No outfit you wear will ever be good enough and god forbid you exit the house in the next 4 years without perfect hair and makeup. 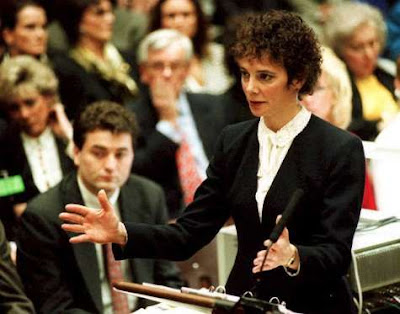 Like many other people in this world, I am obsessed with True Crime. I was incredibly young when O.J. Simpson murdered Nicole Brown and Ron Goldman (no doubt, if you disagree, message me so we can talk about it). I don't remember Simpson being a football star, only a murderer who got away with it. When the T.V. Show "The People vs. O.J. Simpson" came out, I devoured it. My dad watched most of the episodes with me. He remembered this case vividly. He had followed it, like most people, when it was happening. While watching this show, he asked me, "As a woman, can you tell me why the media was so obsessed with Marcia Clark? That's the one big thing I remember from this case, how Marcia Clark was dragged through the fire for what she wore and how she looked." The answer I gave him is that I didn't know why. I read through a lot of articles that had come out during the case and he wasn't wrong. Marcia Clark was ridiculed, non-stop, for her appearance. I'm not even talking about how "cold" she looked to people. I'm talking about the media attention surrounding her hair, her clothes, her makeup... There was a man who murdered two human beings and the entire world was obsessed with what Marcia Clark wore to court that day? Pathetic. I never found anything regarding how the men in the courtroom dressed or Robert Shaperio's eyebrows (come.on.). It was all about the strong female who took this case on, but not because of how she was a strong single mother, but about how she wasn't hot enough. But we want men to treat us better?

And lastly, a slightly bigger issue I wanted to speak about... 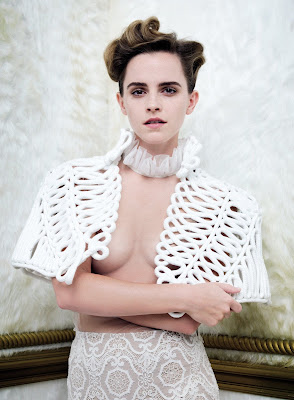 I'm sure that at this point, you have seen this photo and heard about everything that has happened surrounding that photo. That's the ever beautiful Emma Watson in Vanity Fair. Here's my favorite tweet in response to this photo:

When I read that tweet, I'm pretty sure I simultaneously snort-laughed and wanted to throw a drink in the face of this woman. Let me please engrave this into your brain: You cannot call yourself a feminist while actively trying to pull other women down. You are here to help other women and to empower other women. There is nothing sexier than women empowering other women to empower other women. It's the circle of a beautiful life that I wish was more expected than hoped for. That being said, I will let Emma Watson's words speak for me:

"Feminism is about giving women choice, feminism is not a stick with which to beat other women with. It’s about freedom, it’s about liberation, it’s about equality. I really don't know what my tits have to do with it."

And on that note... Please, if you are a woman reading this post, please make an active effort to empower other women around you. If you don't like what another woman is wearing, it does not matter. She's happy, let her wear what she wants. Just because you don't want that cupcake doesn't mean you should rip apart another woman who does want that cupcake. Eyebrows are important but some people are cool with whatever genetics gave them. Please allow women to have choices in their own lives and support them in those choices. Please create a world that little girls can thrive in. Please help be the change in this world.

Please believe me when I say that actively working on not putting other women down has been the best and happiest decision of my life. It has made me so much more confident and empowered.

If you ever need someone to talk to about self-love, I am always here for all of you.

- so I can sigh eternally -
lauren.

Posted by Lauren Kaleo at 8:34 AM No comments: