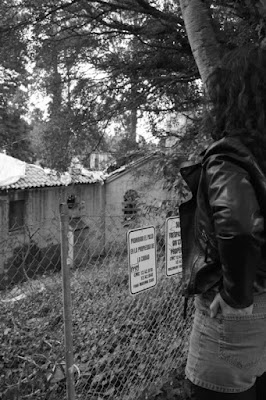 In another life, I was a "photographer". I love(d) black & white photography and took my camera everywhere I went. Unfortunately, it sometimes feels as if iPhones have taken away the true art of photography. It's been many years since I have ventured around with my camera (that is now broken anyway). In college, I took a film photography class and learned how to develop and print photos in a dark room. When I'm a grown up and I have my own house, I really hope that I still make that dark room I want and develop my own photos. Photography isn't as exciting on an iPhone.

Back in my photography days, I went on many adventures to find the best places to photograph at. There was the cemetery, the old mental hospital (or just a dentist office, no one ever knew), the Alameda Base (before everyone tried to make it cool), and the run down mansion that almost killed Michelle and me.

The year is 2010. I just discovered that there is this run down mansion in Capitola, California. If you have never been to Capitola, it's a pretty adorable beach type town by Santa Cruz. In early 2007, I dated a guy for a few months who lived down there. The fact that he never told me about this run down mansion (that ended up being in the park area right behind his grandmothers' house) really shows you how well he knew me. As soon as I discovered this beauty, I called up one of my go-to girls, Michelle. Michelle is the person who was always down for my dark, goth themed photoshoots. She tramped around a cemetery in San Lorenzo with me and wore my (Hot Topic) clothes just to walk around on my street. On a cloudy and grey day, we drove on down to Capitola. I had heard online that this mansion might be haunted and that it was "fenced in". From what I could find online, there was always some magical way to get in. Michelle and I were totally fine with breaking a few laws if we got some great photos. Plus, it's not like this was my first time breaking in somewhere to take photos...... :) 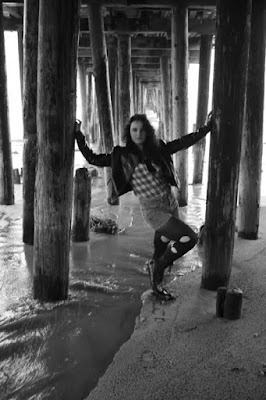 Once we got down to Capitola and parked my car, we walked around what we could of the perimeter of this mansion. The mansion was backed up to this river. At that time, California was not in a draught and it was that wet time between Winter and Spring. That river was a-rushin'. We walked around the other three sides of this fenced in mansion, trying to find a hole or a way in. Looking back, our first sign of "Maybe we should just bail" was about to happen. The boots that I was wearing were black military style boots. These boots were not fancy or heeled in any way. They were just flat, literal military issued boots. While walking down the flat and straight sideway, I went down. When I say that I went down, I mean that I tripped on the air in front of me and twisted the living hell out of my ankle. Now, I am not the most graceful butterfly in the world. This means that Michelle and I brushed it off as, "Lauren, can you not constantly hurt yourself?" because I'm really good at that. Michelle and I continued on until we see that there was a park bench underneath a hole in the fence. Until that point, it has not rained. It just threatened to. We looked at one another and debated if we really were going to jump through or not. Besides, once we got to that side, there was another fence we'd have to try and hop over. There was only a small section to land on before a very steep hill started. At the end of this hill was that river I mentioned earlier. That very fast moving river. As soon as Michelle and I said, out loud, "Alright, let's just do it", the rain started. And it wasn't a little tickle. It poured. The rain started coming down in buckets. We didn't let this stop us. Michelle threw her phone in my backpack (which also contained 1 Canon Rebel Camera, 1 film camera, and 2 Cell Phones) and hopped through the hole. She landed gracefully. Now it was my turn. Remember that time I said that I was not a graceful butterfly? Yeahhhhhhhhhhhh. When I hopped through, I completely lost my balance. 100% lost it. I slammed down (onto my back and on that backpack with many breakable things in it) and quickly started sliding down the hill. Very. Very. Quickly. Then things got a little worse. On this slide down, there is a bit of a drop that you can't see from where Michelle was standing. The drop was probably only about two feet and wouldn't have hurt too much. The thing that concerned me the most was the very slim and rusty pipe that was sticking out of the ground at a diagonal angle... It was pointed straight at me. At this point, I started spinning to my side (not on purpose). In other words, from the angle that I was going, this pipe was going to go through me. All I could think was that Michelle was going to have to call the police and the ambulance and I felt really bad that I was going to make her do that. My second thought was, "OKAY MY BAD. I shouldn't be here. If you let me live, I swear we will leave." Next thing I knew, the pipe slipped between my back and my backpack. As I fell off the drop, I was thrown forward, but I couldn't move... Because the pipe was caught in my backpack straps. Michelle slid her way down (in a controlled, non-accidental way) and was able to help me get out. She looked at my back and saw a nice big scratch from the pipe (which hurt for days but didn't need medical attention). We also quickly checked all things in my backpack... And not a thing was broken or damaged in anyway. We made our way up the hill and back through the hole, vowing never to try and break into that mansion again. 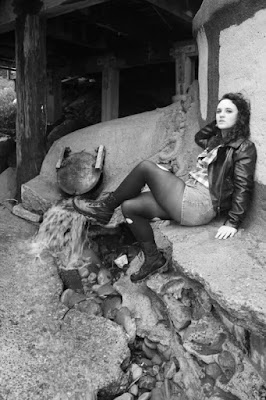